There is a lot of hype around A.I. as it’s being presented as the next candidate for a ground-breaking technological disruption.

While this is certainly happening for some specific areas such as the smart-home devices ecosystem, others like biometric authentication still need technological refinements to make the authentication process as secure as possible.

In the current technological landscape, A.I. is playing a major role in trying to provide user-friendly and more secure bio-metrics authentication schemes including but not limited to Face and Voice authentication.

Although many financial institutes like HSBC are starting to use voice to authenticate its users (HSBC, n.d.), this method of identifying users still cannot be considered as secure as using more robust biometrics authentication solutions such as fingerprint or Iris. This is due to the fact that, although a person’s voice can be considered unique according to some researchers (Trilok, 2004), it is still very trivial to fool current state-of-the-art voice authentication systems (Simmons, 2017).

During the last few years a lot of attention has been brought around new ways to bypass the current state-of-the-art voice authentication mechanisms.

For example, Baidu has announced a new AI system that can mimic a subject’s voice after training itself on less than a minute of audio snippets.

These security threats can be categorised as ‘voice impersonation’ attacks whereby attackers try to steal or impersonate another person’s voice by either using previously recorded samples of the original voice or with the help of machine learning techniques such as Deep Learning.

In general, here is how a voice impersonation attack works:

In this blog post we demonstrate how easy it is to bypass the Amazon Echo/Google Home voice recognition feature with the Lyrebird technology (https://lyrebird.ai), which claims to be able to mimic any voice from as little as a minute of audio recording. According to Lyrebird’s researchers they manage to create the “most realistic artificial voices in the world” by using artificial neural networks that rely on deep-learning techniques. In particular, to create new data which is based on an initial training set (that could be a set of images, videos or in this case voices), Generative Adversarial Networks (GANs) algorithms are used to create a new output that is similar to the provided input (e.g. a digital voice that resembles the original voice).

In the following videos you can see how it was possible to bypass the voice recognition feature on the Amazon Echo and Goggle Home devices.

To create a digital clone of a person’s voice the following steps were followed: 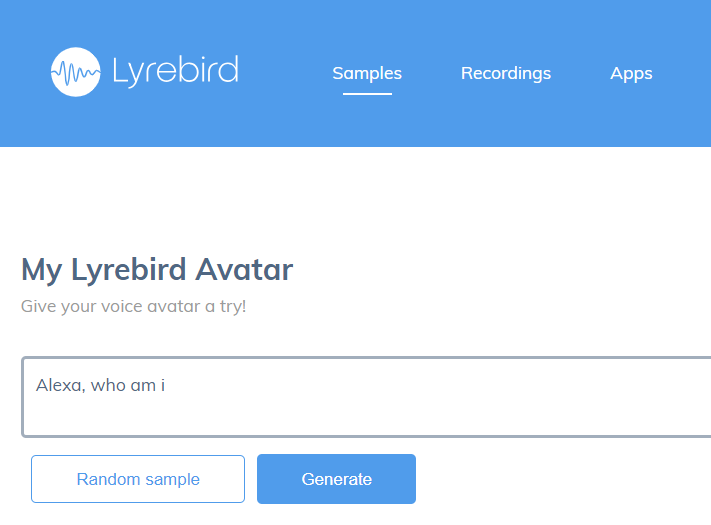 In the following video you can see how it was possible to bypass the voice recognition feature on the Amazon Echo device using the Lyrebird service. It is worth noting that it was not possible to bypass Google Home devices by using the same technique but that does not mean it cannot be bypassed by using an alternative or similar approach. It also played an important role that, for the purpose of this testing, no dedicated or high quality microphones were used in order to better simulate a real-world attack scenario.

It is worth noting that both Google and Amazon don’t treat this as a security issue as these are not advertised/implemented as security features. In other words they are not used to provide any form of voice authentication but only as a mean to receive different instructions or requests and respond appropriately depending on the voice that’s speaking. It is also worth noting though that Google’s Voice Match allows users to create different users profiles with custom information including payments methods.

Inter-Protocol Communication is the ability of two different protocols to exchange meaningful commands and data.

END_OF_DOCUMENT_TOKEN_TO_BE_REPLACED

Doing code reviews and application tests is a normal part of life at SECFORCE, and as a part of my security research a few days ago I turned my attention towards the open-source project Ajenti, a server control panel similar to webmin.