Published on May 9, 2019 by Thanos Polichronis / Lorenzo Vogelsang

Beware of the overlooked, unprotected, seemingly innocent network printers sitting in your office. They often disclose more information than social media on Game of Thrones.

With the continuous need to scan documents in the office, it is common practice to configure network folders within the network for storage, sharing and bookkeeping purposes.

It is also very common that printers are configured with domain user and SMTP login information to connect to domain resources and send scanned email attachments to employees’ inboxes. And speaking of spoilers, you can see where this is going.. 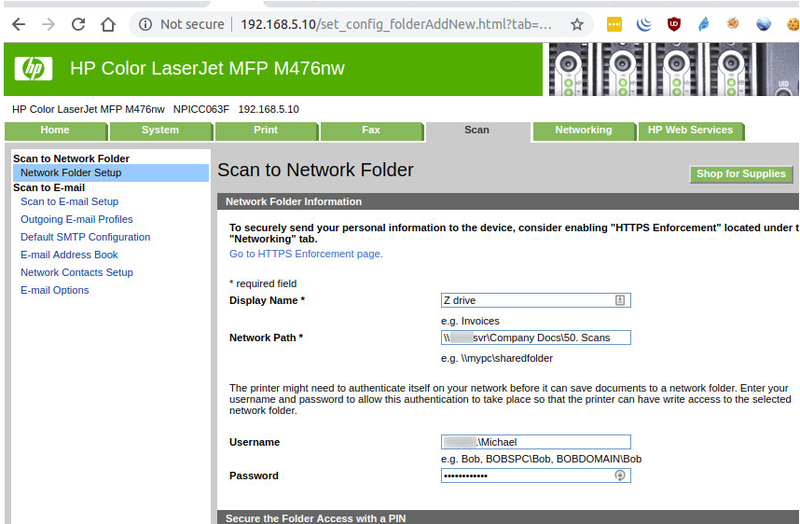 The domain share can be accessed with the login information stored within the printer’s web interface.

The first obvious attack vector is to use spoofing techniques in order to obtain the credentials. The attack will work only if we modify the network path and replace it with the attacking host’s IP address. Alternatively, we could resort to spoofing techniques (e.g. NetBios, LLMNR), where domain names are used, to point the network printer to the attacker’s host by replying to said broadcast queries.

The following steps were taken in a recent assessment to capture the LDAP credentials:

LDAP login information is very likely to grant an attacker access to an AD user account and by extension, domain resources.

1 - Launch an NTLM server on the attacker’s box (e.g. Responder, Metasploit’s auxiliary/server/capture/smb) which is listening for any connection

5 - Save and Test the connection

6 - The NetNTLMv2 hash is captured by the fake NTLM server

7 - Subject the hash to offline cryptanalysis to obtain the cleartext password or, depending on the configuration, use a relay module (https://byt3bl33d3r.github.io/practical-guide-to-ntlm-relaying-in-2017-aka-getting-a-foothold-in-under-5-minutes.html) to pass on the netNTLM hash and execute commands on remote hosts 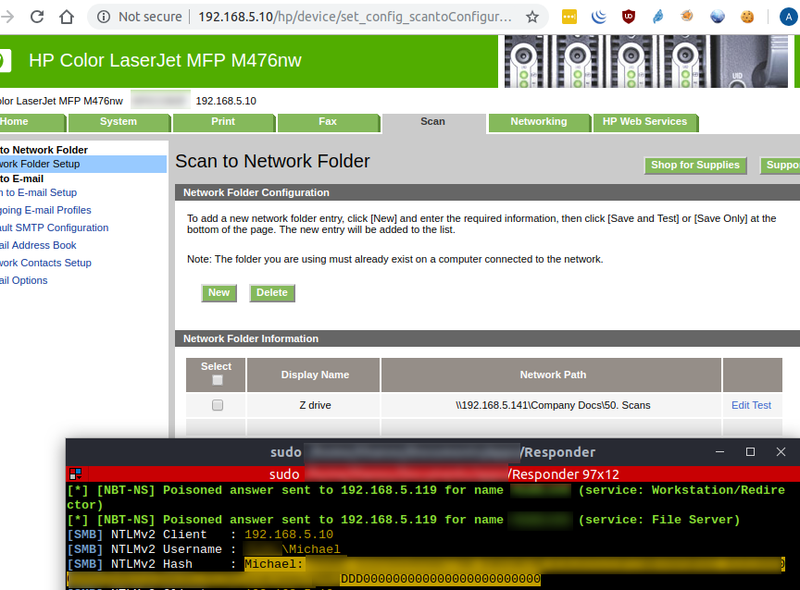 Add workstations to the domain Privilege

An often rather overlooked setting within the Active Directory is the privilege to add a workstation to the domain. This privilege is by default afforded to all domain users when it should only be a privilege of the workstation admins group. Following the attack outlined above in a recent engagement, we were able to use the low-privileged printer domain account so as to add an attacking Windows VM to the organisation’s domain and interact with its resources. Consequently, this opened the way for a plethora of other attacks and allowed us to elevate privileges through other attack vectors (Share-hunting, Kerberoasting, BloodHound, etc.).

It should also be mentioned that printers are very rarely monitored in the current landscape, so exploiting this functionality is likely to go unnoticed, unless the organisation has specifically invested in monitoring abnormal AD activity (e.g. ATA). In conclusion, a seemingly innocuous functionality within a printer is starting to have real, tangible and considerable impact on the internal domain’s security goals.

Small and large enterprises alike, should be mindful when choosing a network printer. A few things to consider

4 - Finally, consider restricting the administration services at a network level so that only connections from a network segment - much like, a management VLAN - are allowed. This way, only select workstations or hosts would have access to the configuration of the printers and the attack surface would be somewhat reduced.

END_OF_DOCUMENT_TOKEN_TO_BE_REPLACED

Holistic penetration testing – when 1 + 1 does not always equal 2

Our view about the correct approach to penetration testing.