CVE-2017-0199 leverages the way an OLE object is embedded into a Word/RTF document making it possible to execute its content without user interaction.

OLE is supported by many different programs, and OLE is generally used to make content that is created in one program available in another program. For example, it’s possible to insert and render a RTF document in a second RTF file. However if the linked RTF file is replaced with an HTML Application (HTA) payload, then the mshta agent will execute it thus leading to a Remote Command Execution that requires no user interaction.

In this article we will be explaining the underlying process of creating a working Proof of Concept RTF file that will execute a Cobalt Strike Beacon payload without the need for user interaction nor terminal popups as this could prove to be extremely useful in Red Team.

Please find below a brief overview of the involved steps:

In order to be able to receive the connection back from the executed beacons the following steps are needed:

Start the Cobalt Strike Team Server with the following command:

With that command a Cobal Strike Team Server on the default 5050 port will be run. In order to be able to connect to the server (using the password that was set with the previous command) you will need to start the client:

With the client GUI up and running let’s create a Beacon listener clicking on “Listeners” from the Cobalt Strike menu:

As you can see from the following image in our scenario a windows/beacon_http/reverse_http payload with a local IP address listening on port 4444 was used:

Continue with the setup re-entering the IP address you will use or any domains that resolves to it:

Once the listener is started we will need to generate the Beacon payload that will be executed on the victim machine. In order to do so click on “Scripted Web Delivery” from Attacks -> Web Drive-by menus as it’s shown by the following picture:

Once the “_Scripted Web Delivery_” window pops up fill out the required parameters. You can modify them to match your needs: 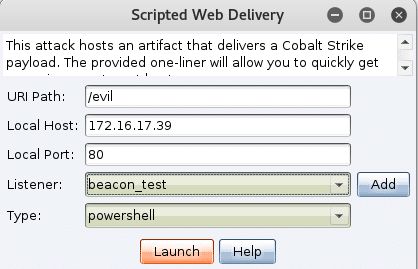 To make the scripted delivery effective click on Launch:

This will make our IP to host a Powershell script named “evil” that will be executed on the victim machine running the command shown in the previous image:

In this section we will be covering steps 2 and 3 (please refer to the Introduction) in order to setup the environment for the exploit delivery to be effective and without user interaction required.

The first step we will need to perform is the creation of the CVE-2017-0199_POC RTF document that will be a simple RTF file with an arbitrary content. In our scenario it will include a POC text like the one showed by the following picture: 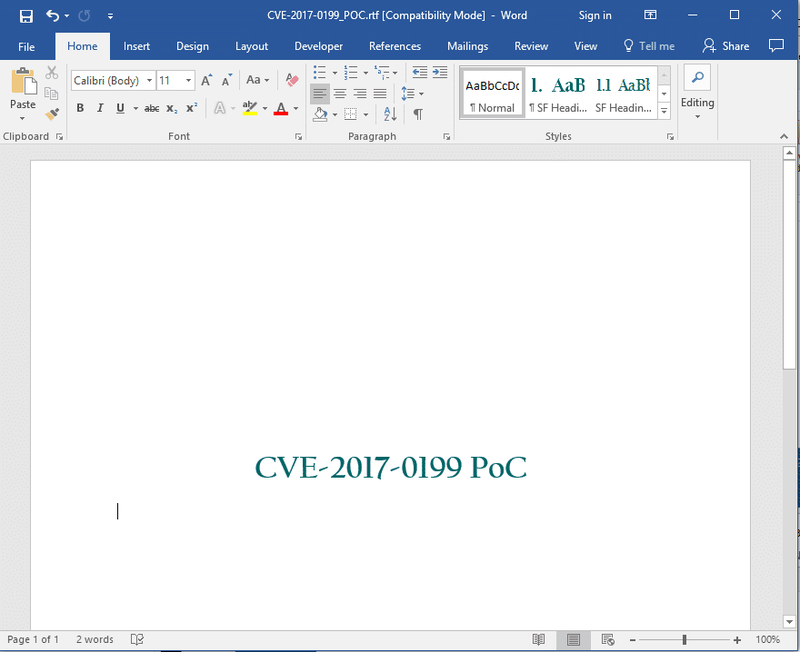 Once the file is created, for your convenience, copy it to your local installation of Kali as we will need the file ready for the OLE linking process that will be explained in the next steps.

In order for the file CVE-2017-0199_POC to be linked we will need to serve it using Apache that in turn will need a few adjustments to be effective.

This will copy the previously created document to the Apache’s directory in order for the document to be served an HTTP OLE link.

The OLE linking process will involve PROPFIND requests sent by word to the server thus making the WebDav enabling a necessary step:

If everything goes right you can then proceed to edit the apache2.conf in order to instruct Apache to effectively serve the RFT file.

In order to do so edit the /etc/apache2/apache2.conf file with your preferred text editor and add the following lines at the end of the file:

To make the changes effective restart the Apache web server:

Once Apache is restart we can then proceed to the linking process with just a few easy steps: 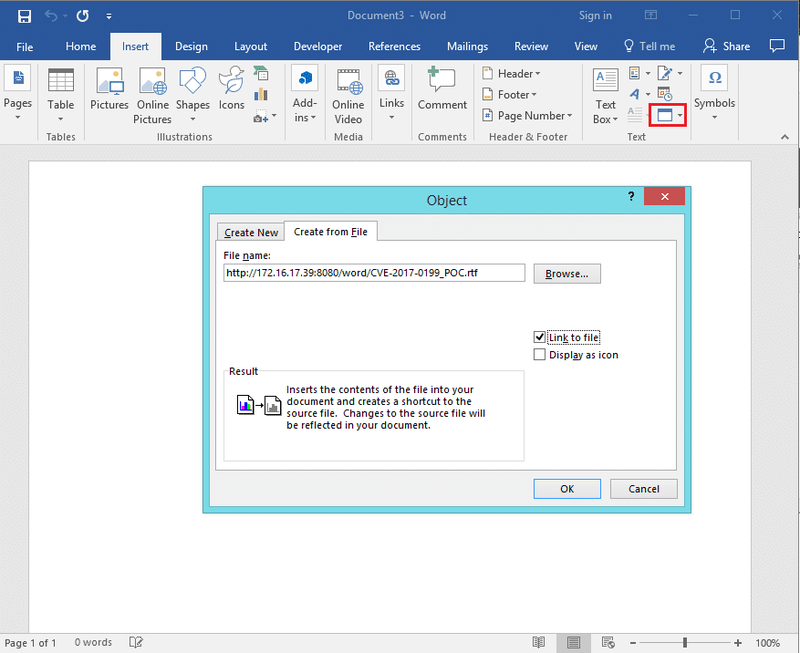 Click on OK and save the file. The file will then modified in the Exploitation session in order to trigger the payload execution without any user interaction.

We will now need to generate an HTA payload or simply put a piece of code that will be executed by the Microsoft mshta agent that is responsible for the execution for these type of files.

We will be modifying the following HTA skeleton in order to execute our Beacon payload:

To do so the first step will be to replace the ‘command’ with the Powershell command we want to be executed on the victim machine.

As seen previously the command is the following:

Everything seems fine now but if we try to execute this HTA it will pop up a powershell/command prompt window but we would like to be as stealthy as possible. Performing a little bit of research we found that modifying the Run© string to Run(c,0) will result in our command to be executed without any command prompt/powershell window popups.

So the final HTA payload will be the following:

Now will need to replace the “_/var/www/html/word/CVE-2017-0199_POC.rtf_” document with this newly created HTA payload.

The following commands could be used to do that:

Save the HTA payload as /var/www/html/word/payload.hta

To make this change effective and trigger the payload execution we will then need to instruct Apache to serve this file not as RTF but as a HTA.

To do so simply change the Content type from “application/rtf” to “application/hta” into the previously edited /etc/apache2/apache2.conf and restart the apache web server.

To make the Beacon payload execution possible even without user interaction we will need to modify the previously created exploit.rtf document.

The parameter we will be adding is “objupdate” that, as the name suggests, will trigger an automatic update/execution of the linked file when the malicious exploit.rtf is opened.

In order to apply this change and weaponize the document the following command would be needed:

The exploit.rtf is now ready to be sent and it will trigger a Beacon payload to be executed without any user interaction nor terminal popups as you can see from the following images and POC video 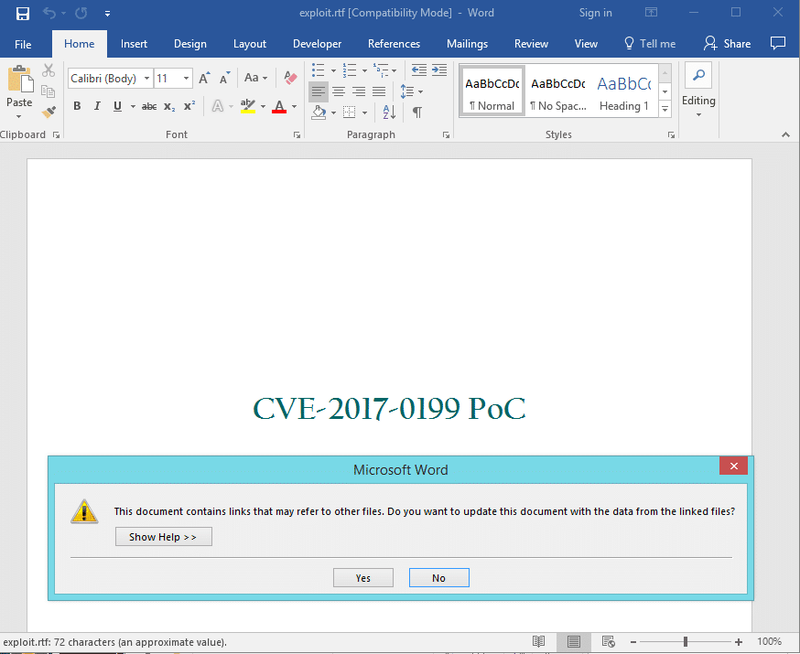 A reverse HTTP Beacon was successfully received by our listener:

However, we also tried the file on a Windows 7 SP1 instance with Kaspersky’s Small Office Security installed. On this environment Kaspersky flagged our file as malicious and prevented the payload from executing.

In part 2 we will be discussing ways of bypassing Kaspersky and other anti-virus suites to deliver the payload successfully across these environments.

END_OF_DOCUMENT_TOKEN_TO_BE_REPLACED

The Financial Information eXchange (FIX) protocol manages the processing of real-time exchanged information within Financial Markets. It was originally authored in 1992 and became very famous very quickly as it helped shift the communication of trading data from the inefficient telephone to...