Doing code reviews and application tests is a normal part of life at SECFORCE, and as a part of my security research a few days ago I turned my attention towards the open-source project Ajenti, a server control panel similar to webmin. A CTF I participated in a few months ago had sparked my interest for the control panel as it revealed some aspects of the application had poor permission control for some of its back-end API. What else might have poor permission controls, I wondered? Well, their plugin management system, as I soon discovered, leading to a remote code execution vulnerability.

A little background before we get to the good bits, Ajenti control panel is highly modular and the core is highly stripped down and it implements most of its functionality as optional ‘plugins’. A superuser logs into the control panel, navigates to the plugin section and installs whatever functionality they might need. This plugin could be something like notepad to edit files on the local system, a terminal to spawn a shell to interact with, etc. Useful stuff. As it turns out though, only the client-side application checks whether you are a superuser when performing the check to see if you are allowed to install plugins. The back-end never verifies this and is happy to install whatever plugin we desire (with some minor constraints) under whatever user we’re running as. As it happens, the plugins are python wheel files. Those types of files pose a particular problem to Ajenti in this scenario because you are able to bundle post-installation scripts with them. Essentially, by crafting a specific python wheel file and passing it to Ajenti, Ajenti will let us run any code we want as the currently logged in user. Even if we’re not logged in as an admin this would potentially let us:

The offending code which lets us pull off our exploit is this:

It essentially takes the plugin name as a parameter and runs it under a pip install command without ever bothering to verify anything. We can’t do things like overwrite which command is run because our data is forced to be the 2nd parameter to pip (and because it’s passed in an array we can’t inject other parameters), and also in the format of ajenti.plugin.==, which instructs pip to install a specific version of a said plugin. In other words, it will call:

By default, pip pulls python wheel files from the public package index PyPi, which anyone can upload to with any name. That includes us.

The only constraint that the ajenti code places on us is that the package has to start with the name “ajenti.plugin.”. That’s not a problem. PyPI allows you to upload any package with any name as long as it’s not already taken. There is no way to “reserve” ranges of names or anything like that so I could for example upload a package with the name ajenti.plugin.security-fixes or ajenti.plugin.config or anything else official sounding and there is absolutely nothing stopping me.

PyPI stores and makes available Python wheel files. Python wheel files are basically a self-contained installer package for python code. They’re essentially a zip file with python code, some information on who wrote the app, what version it is, what needs to be done with it… and sometimes a post-installation script which will run automatically once the package is done installing. You typically build these with the python setuptools (a decent tutorial: https://packaging.python.org/tutorials/packaging-projects/ ) and then upload them to PyPi with twine (another python tool).

Since we’re only interested in the install script, we’ll use the default example package that Python uses in the tutorial I linked above. My intention with this is that it’ll make this article sligtly easier to follow along should you desire to do so.

I’ll provide a brief summary of what we have to change and do though so that you don’t have to read the tutorial if you don’t want to, but essentially the file structure of our package will look like this:

Setup.py is the magic file that lets us pull off this exploit. It has the following structure (Don’t worry, I’ll explain the important bits):

For our purposes, we’re going to have to make some changes (I have added comments describing what each section does):

There’s a bit more going on, but the important things to notice are the cmdclass{'install':install_exploit_class}, name, version and the install_exploit_class itself. I also modified the python_requires and the classifiers bit, but you can according to the technical packaging specification omit these entirely if you want. I’m just keeping them to keep in line with the python example code.

One caveat to keep in mind is that both building and installing the python wheel file will run the post-installation script (so you’ll run your own payload on your own machine by default), so if you care about the payload running on your system (I don’t) you’ll want to encapsulate your payload in something like so:

After all these files are in place and written, you simply place yourself in the root folder (exploit_package in my case) and run

This command is really only if your code is compatible with both python2 and python3 since it’s using the universal flag. This means you have to be careful when writing your exploit code since there are some statements and libraries that are different across versions. My exploit code is going to be exceedingly simple though, so it’s not a problem for me.

Simply, my install script is going to create a file under /dev/shm/ called “rce.verified”. There’s no reason you couldn’t make the script your favorite python reverse shell oneliner if you wanted. For my purposes though, I just want to confirm we’re getting code execution and with a file we can confirm both the existence of RCE (it was created), who we’re running under (the owner of the file) and when it was created (write/read/access timestamps). So it’s more than enough.

We now need to upload our package to PyPI and install it. Easy peasy!

First, you need to create PyPi account if you don’t have one. I’ll be creating a throwaway one for the purposes of the exploit, but I won’t cover that. Then, from the package root folder (exploit_package) you run:

It’ll prompt you for your PyPi username and password and… there you go. You’re done. If you want, you can verify it’s uploaded on PyPi by logging in and checking your packages. 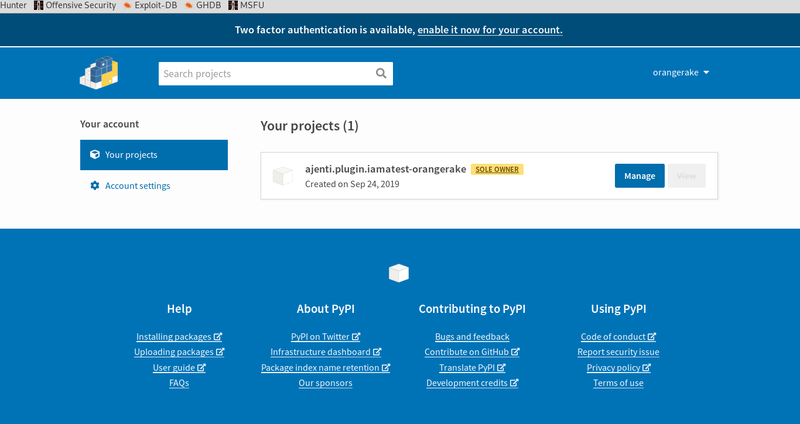 My plugin name in the request will be “iamatest-orangerake” (because it will be prefixed with “ajenti.plugin.” and I won’t have to include that) and my version will be “0.0.1” because that’s what I specified in my setup.py file.

A script to partially automate this request (keep in mind you WILL need an authenticated session and its cookie, it just doesn’t matter which user it is):

Thanks for reading! I hope this information will be of use to someone.