The issue is located in the libraries\import\xml.php file, where the simplexml_load_string() function is called without validating the existence of a reference to an external entity on the file:

phpMyAdmin offers the functionality of importing a database from a user-specified XML file. In vulnerable versions importing a specially-crafted XML file which contains an external XML entity permits an authenticated attacker to retrieve a local file from the server or network (limited by the privileges of the user running the web server).

It is well understood that the LOAD_FILE MySQL function could be used to gain read access to files in the database file system, however there are configurations where phpMyAdmin is installed on a different host than the database and therefore exploitation of this issue could become handy in penetration testing engagements.

SECFORCE has developed a metasploit module to assist the exploitation of this vulnerability. It is available for download from our our GitHub repository.

This module automates the process of local file inclusion in the following way:

The module has the options shown in the following screenshot: 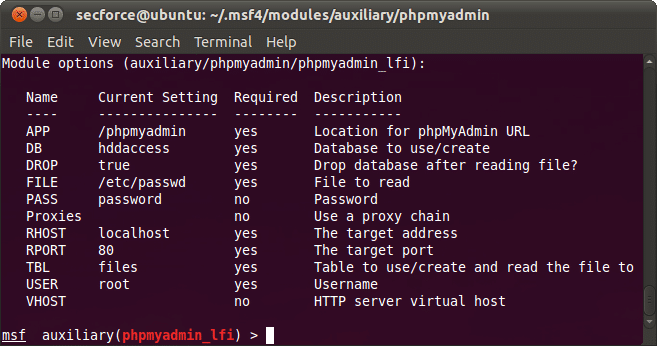 An example of a successful run of the module is presented in the screenshot below: 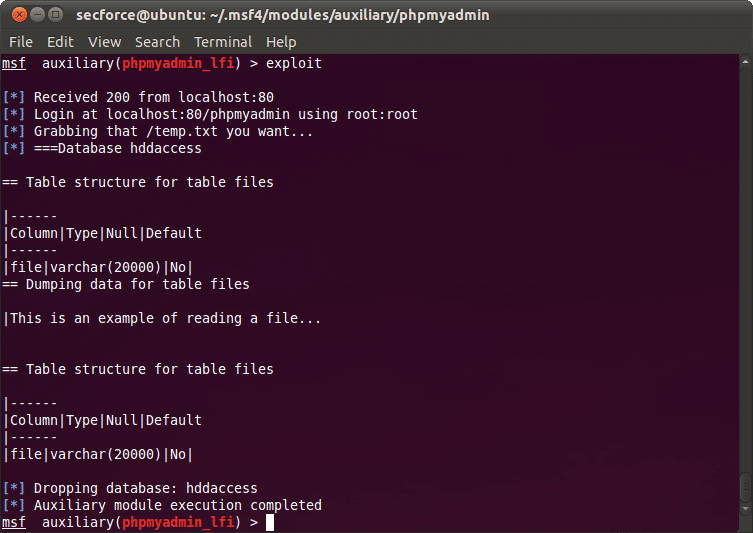 XML external entity injection attack (XXE) “External Entity: The set of valid entities can be extended by defining new entities. If the definition of an entity is a URI, the entity is called an external entity. Unless configured to do otherwise, external entities force the XML parser to access the resource specified by the URI, e.g., a file on the local machine or on a remote systems. This behavior exposes the application to XML eXternal Entity (XXE) attacks, which can be used to perform denial of service of the local system, gain unauthorized access to files on the local machine, scan remote machines, and perform denial of service of remote systems.” – (OWASP-DV-008)

phpMyAdmin has released patched versions available for download from here.